In December 2009 and January
2010 I held a self-portrait workshop at San Camillo, a community for people who
are terminally ill with AIDS. Having survived my own drug-dependency unharmed,
and having lost most of my friends to AIDS without having seen them die,
working in such a community meant I could give back my good luck, confronting
the scary disease and maybe learning something about terminal illnesses and
death.

The experience literally turned me inside out, which is
what I was looking for: this is one of those positively shattering experiences
I’ve always got into since I was in my teens. Already during my presentation,
the inmates continued to interrupt me with the sort of uncomfortable questions
I really appreciated. Educators said that they had never heard them talk like
that…! They were all ex-drug addicts.

When I told them about my own dependency with heroin, and
that I didn’t take any more drugs since 1981, one asked me “Are you sure you
will never take drugs again?” I answered “Yes.” The same one replied “How can
you be so sure? I didn’t take heroin for 17 years and then I did…”.

He was right. Who knows what the future will bring? We
cannot be sure of anything. If misery falls upon me, if I become very ill or in
deep inner pain, I could decide to take drugs to relieve the pain.
Nevertheless, I don’t think I will, because I am not willing to escape anymore.
I want to live through the pain and suffering to come, or, the joy and the
beauty, with my heart and mind well awake, and able to understand the world and
my fellow humans.

A whole day and a half of individual self-portrait
sessions followed, and sixteen patients and educators participated. Some
accepted to lie down on the floor, climbing down from their wheelchairs or
being hoisted down by a weird machine I had never seen before. Others decided
to stand.

I had an image in my mind I wanted to accomplish. I had
just come back from London where an important curator had advised me not to
mention that the collaborative self-portraits of HIGHER SELF were produced for
therapeutic purposes, because “art must exist for its own sake”.  This
made me feel that I had to be more extreme, to protest against this bourgeois
idea of art: if the art world rejected the therapeutic purpose it meant that my
work was uncomfortable, so I had to scream even louder. The existing separation
between art and therapy is intolerable. Art and therapy are two faces of the
same coin, if we’re talking about the best art and the best therapy.

I imagined a desperate cry, a terrifying or terrified
scream. An image which made people uneasy, because it represented THE
primordial cry of the suffering human being. The cry for all the dead, the
suffering, the tortured, the sick. We have grown too used to see images of pain
in their context, so a de-contextualized image of suffering can be unbearable.
So I added something to my instructions, I asked them, as usual to choose
between RAGE, DESPAIR and TERROR, but performing a silent scream, stretching
out their faces into a Greek mask, and letting all their emotions go out their
mouths.

And Salvatore, from Pompeii came and produced that image (above).
He happened to be born in the same year and month as me, and many other
coincidences with my own life. I was deeply moved by the whole sequence he
took. I didn’t manage to understand it fully. It looked hermetic… but I could
see a very sick and thin man expressing a huge charisma and strength. He seemed
to be performing a shamanic ritual: the solemn expression on his face, his
sophisticated gestures in other photographs. I kept looking at the pictures,
at our chosen picture, then at him, astonished and so moved to see my
inner image becoming real, I broke down and cried. He broke down too, so we
hugged. It was one of those few encounters in life. He was like my alter ego:
he went through the same steps as me, but with a completely different outcome.

I kept talking to Salvatore regularly for about two
months. I wanted to understand what it means to be so close to death. His
attitude and rebellious behaviour reminded me a lot of my own, so he was the perfect
Virgil who could get me into the inferno. He was always in conflict with
everyone in the community, he said “Rage and hatred keep me alive”, and I knew
exactly what he meant. I asked him to write his life story. 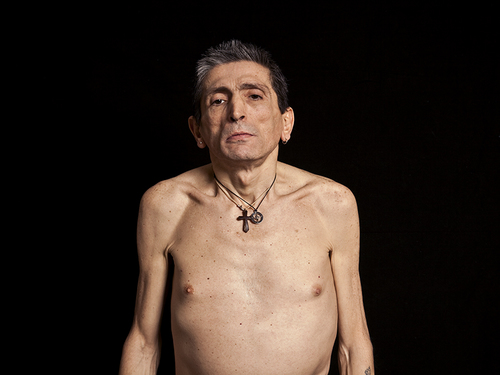 Salvatore was born in a poor family in Pompeii. His
father had to migrate north to Milan to find a job and the whole family
followed in an endless journey on a train in winter. He was seven then, dressed
in his Sunday suit with short trousers and his best shoes. When he stepped out
of the train, there was snow all over so he slipped to the ground. He could
recall the gloomy atmosphere in Milan’s suburbs, the lack of joy in people’s
faces and his family’s isolation, compared to the warmth of the enlarged community in his hometown. He wanted to study history and literature, but his parents could not afford it, so he started working at 14. Soon he started to try drugs, like most of the teenagers in the area, and never stopped since
then. Nevertheless he never ceased to read Homer’s epic poems Iliad and Odyssey, again and again, and identified completely with Achilles, his personal hero.

Salvatore agreed with me on the choice of the best work.
He wanted to cry out his extreme rage and pain to the world and was very happy
to have his self-portrait published as widely as possible. Salvatore deeply
understood my project and could easily see the epic, the greatness in everyone
of us. It’s never too late… 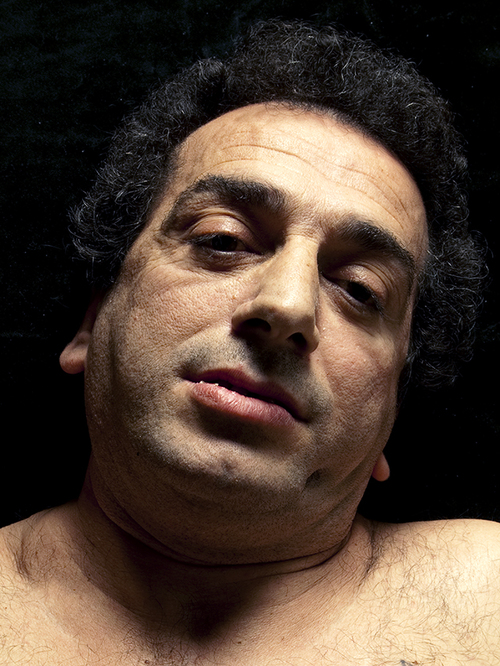 Rosario is on a wheelchair and cannot speak, but his
gaze, his expression is so moving, he doesn’t need to say anything. His eyes seem to express extreme sadness but also empathy for others and sweetness. He decided, with a gesture, he wanted to photograph himself lying down. Educators helped him get from his wheelchair to the floor and take off his shirt. His tattooed chest revealed another life and a handsome southern man. One of his arms was paralysed with a tightly closed fist, making him look like a warrior with a sword in the photographs, which he loved…

While looking at the images, I proposed a closer shot,
because I loved the expression in his face, and he agreed. We was also very happy to have his photograph published as widely as possible, probably to convey his “message” to a wide audience.

Giorgio was a peasant, son of a peasant. He was the one
who asked me uncomfortable questions during my presentation and interrupted me
all the time. He didn’t want to take off his shirt, so I proposed a headshot.
Technically I couldn’t manage to frame only his face, the shirt was in the
picture and I was visibly disappointed because of that. He looked at me as if
saying “you didn’t get it, I took a great photograph!” That evening, back home,
I reframed his self-portrait really close, and suddenly understood he was right
and I was wrong. He looked like a Greek God, the King of all Gods, Zeus…He had his eyes closed in the whole series he shot, with a slight grin of satisfaction, as if he was rehearsing death, and feeling it was not too bad. I was awed by his wisdom. 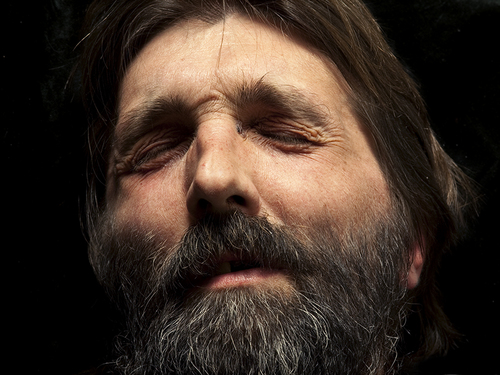 Salvatore and Giorgio used to share the same room, but
quarrelled all the time. Giorgio said Salvatore was unbearable and
disrespectful, and Salvatore said Giorgio was always breaking his balls. During
the group work we did on the images, in which each of them worked on the
other’s photographs, they invented beautiful stories making the other a true
hero. Since then, their relationship changed completely and they became close
friends.

The educators and me were a bit concerned about the group
work at the beginning, since relationships were difficult between them, but we
decided to let them work on each others photographs and invent stories on the
pictures, and the result was amazing. Kings and queens, epic heroes, soldiers,
lovers and free spirits were the characters they invented, going through dramatic and sometimes hilariously comic situations.

During the whole workshop and months later I continued to
think about my own relationship to these people. At the beginning I saw myself
as really lucky, thinking I’ve managed to survive and they haven’t. I felt
somewhat guilty –why me?-, because I knew my family had more resources than
most of theirs. I thought I had made it and they hadn’t. But maybe they’ve made
it too… We tend to see sufferers as victims, but probably this was the life and
death experience they were looking for, which doesn’t mean they won’t suffer
from it. I’m not judging or blaming, I’m trying to see the positive side of
their lives: each one of us is a speaker for humanity, so that others see what
man can become, and learn from it. Our mission as spectators is very important,
to make their courageous act useful: to feel their emotions as we feel ours, to
listen to our own reactions to their despair, to find in ourselves even the
physicality of their situation, to mirror ourselves in them so that we don’t
need to literally go through their experience to learn from it. It’s like
training to become really Humans…